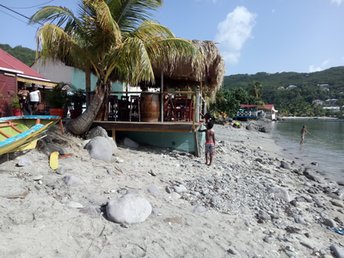 Ultimate guide (February 2023)
Anse Deshaies (locals call it Dɛ'ə, emphasis on ə) is a beach of the main town in Basse Terre island, Guadeloupe. It is hard to believe, but it really has a beach. To be true, this is not a beach, but two small sandy areas. While most of the coastline is stony being very uncomfortable for the swimmers. On the other side, the town has two basic supermarkets, as well as a very nice street with beachfront cafes. So this is very nice place by the standards of Guadeloupe :) There is also some kind of marina in the south end of the bay. However, it has small boats only (no yachts). Shore and seabed: stones, sand. [edit]

Rooms' rates in Deshaies hotels start from US$60 per night. But in reality, you should be ready to pay US$100 or even more. However, rooms are good enough.

Fly to Guadeloupe international airport (PTP). Next take a bus to the Central bus stop of Pointe-a-Pitre. Make a change to the bus going to Deshaies, and get out on the last stop. The first ticket is 1.2 euros, while the second one is 4 euros. Be sure to ask the bus driver about the route's destination.

There is also relatively frequent minibus shuttle service between Deshaies and Sainte Rose (ticket is 2.2 euros per way).

Beach of Anse Deshaies is located on the Caribbean coast of Guadeloupe. So there is never seagrass ashore, and you can have a good holiday any time of year.

However, we hope that you won't stay here for more than one night. There are so many great beaches located just a little to the north.