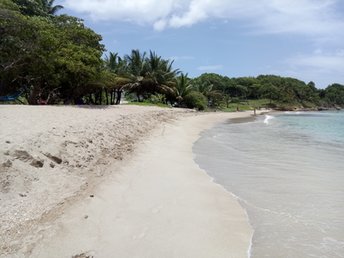 Ultimate guide (November 2022)
Anse Vinty is a beach near Sainte Rose in Basse Terre island, Guadeloupe. This is a low key local destination, as tourists usually prefer more popular attractions. But in reality, the beach is pretty nice. There is no trash, nor algae even in summer, while the view is good, and there are many trees and palms. Right near the coastline there is a reef being good for snorkeling, but not so good for swimming. However, a dedicated swimming area is marked in the center of the bay. It has sandy bottom, while the depth is comfortable both for children, as well as for adults. Shore and seabed: sand, stones. [edit]

Cas' à Willy (Casa Willy) is a true hotel with rooms' rates starting from US$50 per night. It features a medium sized pool, a manicured garden, as well as a private parking lot. The rooms are good enough (but maybe not so good by the European standards). The beach of Anse Vinty is just 5 minutes walking away. There is also a huge supermarket Super U just nearby, as well as some other notable beaches.

Fly to Guadeloupe international airport (PTP). Next get by bus (1.2 euros) to the Central station (Gare Bergevin), and change to the bus going in the direction of Deshaies. Get off at the Anse Vinty bus stop.

You can relax any time of year at the north of Basse Terre island. Of course, some algae can be found ashore in summer. However, it is not such a problem, if compared to the east coast of Grande Terre island.