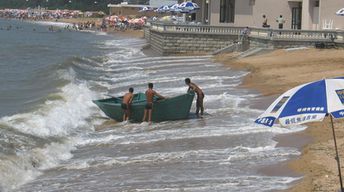 Ultimate guide (July 2020)
Beidaihe is an ocean beach closest to Beijing - the capital of China. It's hard to believe, but there is a relatively nice beach not far from Beijing (though not the best even by the standards of China). A little to the north there is also the place (Shanhaiguan), where the Great Wall meets the sea. Shore and seabed: sand. [edit]

In Beidaihe there is a huge selection of hotels from low to top end. Though average fares are high by Chinese standards, western tourists feel like it very budget here (but service is also not so good as in Europe or US).

Fly to Beijing international airport (PEK). Next take a train or take a bus.

Beidaihe has also a small airport (BPE code), that accepts a very limited number of flights. However, nobody needs this airport, as it's easier to get by the ground from Beijing, while from far away it's better to fly to some more pleasent beach destination.

The best time to visit the beaches around Beijing is a warm period from July to September.