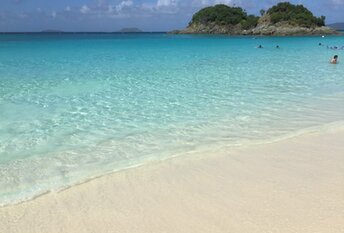 Ultimate guide (February 2023)
Cinnamon Bay is the longest beach in Saint John island, USVI. The west side of the coastline is also known as Peter Bay. The place is almost as beautiful as Trunk Bay, but less crowded and has no admission fee. However, in windy weather, the water is usually more choppy than in Trunk Bay. Snorkeling is great right from the shore. But it is better not to walk on a rocky bottom, as there are many sea urchins. Shore and seabed: sand, stones. [edit]

There is a campsite in Cinnamon Bay, - probably the best campsite in the World. As for hotels, the choice is limited in St. John island, while rooms' fares start from about US$200 per night.

Fly to St. Thomas airport (STT). Get by shuttle minibus to Red Hook pier. Next get by ferry boat to Cruz Bay of St. John island, and take a minibus to any beach you need.

Feel free to relax any time of year in the Virgin Islands. US citizens usually avoid the hurricane season from June to October. But that time the water is warmer, while it's much less crowded.