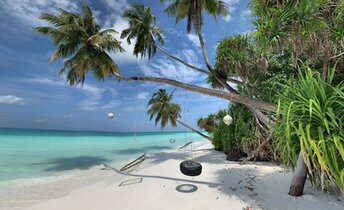 Ultimate guide (April 2022)
Gan Laamu is the main island of Laamu atoll in the Maldives. It is also connected to the south by bridge with Kadhdhoo and Fonadhoo islands, but these are not very interesting. Gan island itself has the entire western coast as one good beach. In the south, it is called White Bay, - there is a lot of garbage that comes from the ocean, and no one takes it away. To the north of marina, the beach is called Mukurimagu, and it is great - with palms hanging over the water, as well as with swings and hammocks. A little further to the north, there is Nazaki Beach also being beautiful and relatively wild. Further to the north, there is the resort's Reveries Beach being totally manicured, but not the most beautiful though. It gives you feeling of an upscale Maldivian resort, but for less money. Shore and seabed: sand, stones. [edit]

Reveries Diving Village is a three-star hotel with rooms' fares starting from US$90 per night. At the moment, this is the only accommodation option on the island. It is also operates as a provider of diving tours. But in the Maldives, most of the hotels provide such services.

Fly to Maldives international airport (MLE). Next fly to local Kadhdhoo airport (KDO). Cost of domestic flight Male-Kadhdhoo-Male is US$230 for adult or US$180 for child (below 12 years old).

The best time for a holiday on the beaches of Gan Laamu island is a dry period from January to April.