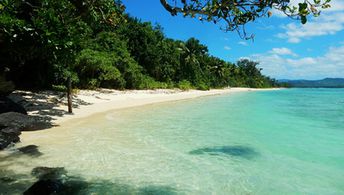 Ultimate guide (January 2022)
Kakula is a small private island in the north of Efate island, Vanuatu. It was a luxury resort for US$45K per night, but the project failed. Now the main building is abandoned, while the entire coast is full of beautiful trees. So the island has become even better. There is also a reef nearby, as well as a lagoon with superb diving. Shore and seabed: sand, stones. [edit]

The status of the island is not quite clear. According to some sources, it is completely abandoned now. But there is also another information, that the island can be rented for US$2500 per night (up to 10 guests), and it is possible to stay in well equipped rooms.

Fly to Port Vila international airport (VLI). Next hire a taxi or take a bus to the north of Efate island - to the village of Paonangisu. Next take a short boat journey (5-10 minutes per way).

The best time to relax on the beaches of Kakula island in Vanuatu is a dry season from July to October.