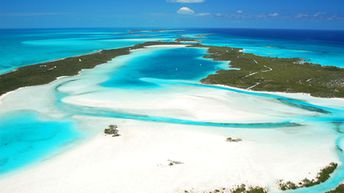 Ultimate guide (February 2023)
Norman's Cay is an iconic island in the north of Exuma Cays, Bahamas. In 70s it was a transit point for the drugs traffic from Colombia to USA. That glorious time, there were always drunken parties with naked girls, that was later reflected in some popular movies. As for now, the only thing reminding about those days is the smugglers plane crashed on the reef. Shore and seabed: sand, stones. [edit]

There are several hotels in the island of Norman's Cay. Unfortunately, these are poorly presented in the international booking systems.

Fly to Nassau international airport (NAS). Next take a boat. Norman's Cay is located relatively close to Nassau, so in many cases you will reach it in less than an hour.

The best time for a beach holiday on the Norman's Cay island is a dry season in the winter half of the year. But the sea water is warmer in summer, which is important in the Bahamas, as it is not the true tropics.