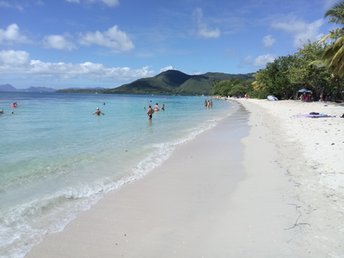 Ultimate guide (April 2022)
Sainte Anne is a long beach in the south of Martinique. It is also known under the name of Pointe Marin. The north end of the coastline features Les Boucaniers and Club Med upscale resorts, - it's beautiful, but there are many sea urchins in the water. The central area is relatively wild (notable for the stadium and occasional sunbeds rental), - this is the best side of the beach. While the south end is a village itself, - with many cafes and shops. This is one of the best beaches on the island. It is great both for walking, as well as for swimming in the shallow water. Shore and seabed: sand, stones. [edit]

At the sides of the beach, there is a large choice of hotels with rooms' fares starting from US$50 per night. Probably, the cheapest accommodations in Martinique are located here.

In the north, there are expensive beachfront properties of Club Med and Boucaniers. As for the south end, the best apartments are Habitation Bellevue - from US$100 per night. You will get a great view of the bay, comfortable and spacious rooms, a veranda and a kitchen. There are also many relatively cheap cafes downside - near the pier, as well as two supermarkets and a local food market.

Fly to Martinique International Airport (FDF). Next hire a taxi. Taxi from the airport to Sainte Anne is €85 if use taxi-meter or €50 if booked in advance. But if you want to explore the island, a rental car is mandatory, - since public transportation in Martinique is very unreliable and very expensive as well.

The best time for a holiday on Sainte Anne beach is a dry period from January to June. Please note, that sea water in winter is colder than in the summer half of the year. You can swim, but it won't be so comfortable like in summer. For example, some locals begin to swim only in March-April, when it gets a little warmer.

On the other hand, the weather is much more comfortable in winter. It's warm enough to sunbathe and to swim. But there is no such an extreme heat like in summer. You will feel the difference at night, when it is possible to sleep with opened windows - without air conditioning.