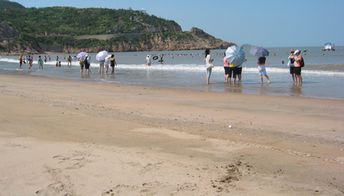 Ultimate guide (February 2020)
Shengsi is the nearest to Shanghai good beach. It is located on the Sijiao island of the Shengsi archipelago - to the east of Shanghai. The island has several beaches including Golden Sand Beach in the north and Nanchangtu in the south. Sea water is clean, and the shore is not overcrowded due to the poor transport accessibility of the archipelago. In addition it is a great place to eat fresh seafood. Shore and seabed: sand. [edit]

Sijiao island has a great choice of hotels with room rates starting from $20 per night. During the weekends and public holidays you should book much in advance - both the hotel, as well as bus/ferry.

Next take a bus to the Shenja Bay island (Shenjiawan). Most of the way goes via Hangzhou Bay Bridge - one of the longest ocean bridges in the world.

Next take a ferry to the Shengsi island. This is unofficial name of the Sijiao island - the largest one in the Shengsi archipelago.

Traveling by the sea is not very long, but seasick is common for most of the passengers. We recommend to take the slow ferry, as the ship is much larger.

The whole way from Shanghai takes 2-3 hours - including bus and ferry. Combo ticket can be purchased at 1588 Waima Lu (外 马路) - near the Nanpu Bridge station (南浦 大桥) of metro Line 4.

The best time for a beach holiday on the island Shengsi near Shanghai is a warm season from June to September.