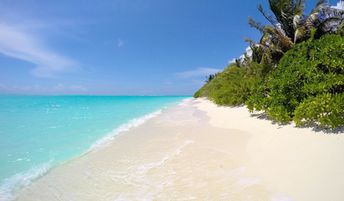 Ultimate guide (April 2022)
Thoddoo is the main agricultural island in the Maldives (North Ari atoll). Watermelons, bananas and many other fruits are grown here. There are also beaches - one of the best in country. That's why the island has become extremely popular among budget travelers. There is a small bikini-beach. Strange, but the choice of fresh fruits in island's shops is limited. Shore and seabed: sand. [edit]

The island has a lot of cheap hotels (room about US$100 per night), and the new ones are opening every year. It is not a Maafushi yet, but it will be soon.

Fly to Male international airport (MLE). Next get to Rasdhoo island by MTCC ferry - route 304. It takes 3 hours 10 minutes, ticket price is about US$5 per way:

- departure from Male at 9:00 on Tuesday, Thursday and Sunday;

- departure from Rasdhoo island at 11:00 on Monday, Wednesday and Saturday.

Next take ferry #303 to Thoddoo island. Ferry takes 1 hour 15 munites per way, and runs every day except Friday:

- departure from Thoddoo island at 7:00.

There is also daily public speedboat from Male to Thoddoo (including Friday). It takes just 1 hour 20 minutes (departure from Male at 16:00) and costs US$50 per person per way.

Attention! In Thoddoo island solo woman traveller may face the risk of harassment and rude attitude. This is absolutely reliable information, obtained from different sources during many years. It seems, that there are few sex addict men on the island (though the most of locals are very friendly). The worst thing is that guesthouse' owners don't go to police, as they afraid that the noise about this problem may spoil reputation of the island. Rather stupid position…

As a result, the police do nothing. Moreover, some hotel's owners believe that female tourists are guilty for their problems.

Please note, that even if a woman wears pareo on a public beach, it doesn't guarantee that everything will be Ok.

Of course, majoruty of tourists had a great vacation on this beautiful island. But it is your safety and your money. So think, whether you need to visit the island with such a reputation.