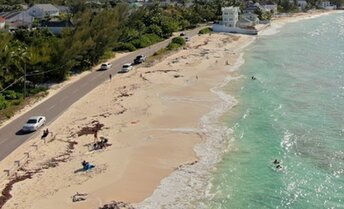 Ultimate guide (April 2022)
West Bay is a beach near airport - in the north of Nassau island, Bahamas. This is not the best beach on the island, but it's not so bad anyway. The western coast is more "exclusive". There are many trees, and there are also few relatively decent beachfront resorts. The east end is not so upscale, since the road comes close to the water. This spot is popular among locals. Shore and seabed: sand, stones. [edit]

Near West Bay beach, there are several hotels with rooms' rates starting from US$130 per night. This is a relatively budget destination by the island's standards. Unfortunately, the final bill is often much more expensive, than one might expect from fares listed on booking site.

Fly to Nassau international airport (NAS) or get by cruise ship from West Palm Beach.

It is best to move around the island by taxi or by the rental car. In addition, there are few bus (so-called jitney) routes in the popular coastal areas.

The best time to travel to the island of Nassau is a dry season in the winter half of the year. However, the summer is also good. Since sea water is much warmer, and there are no crowds of tourists.