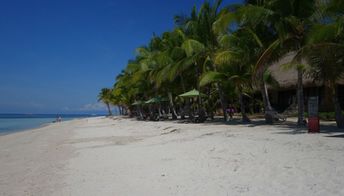 Ultimate guide (October 2022)
Dumaluan is one of the best beaches on the island of Panglao, Philippines. In a contrast to the famous Alona Beach, it is more beautiful and not so overcrowded. It is worth to note palms with hammocks - looking superb! The coastline is a private property of expensive resorts, so you'll have to pay the entrance fee of 25 pesos. However, it is possible to get for free if walking from the north (from Libaong beach), but in this case you won't be able to use the amenities. By the way, Libaong is good as well, but it is not cleaned very often, and the view is not so picturesque. Shore and seabed: sand. [edit]

Directly at Dumaluan beach, there are several upsacle hotels with rooms' fares starting from US$130 per night. But a little to the north - on the beach of Libaong - you can find a room from as low as US$30.

Fly to Tagbilaran airport (TAG). Next get to Panglao island by taxi or by shuttle minibus.

The best time for a beach holiday on Dumaluan is a dry season from January to May.