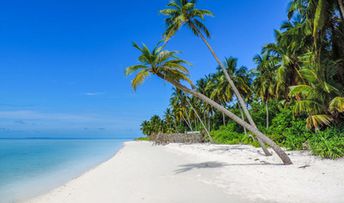 Ultimate guide (April 2022)
Himandhoo is an inhabited island in Alifu Alifu Atoll, Maldives. Bikini beach is not long, but very nice with picturesque palms hanging over water. Entry into the water is uncomfortable due to the broken corals. Snorkelling is great both on the house reef, as well as in the lagoon located to the west off the island. Shore and seabed: sand, stones. [edit]

Himandhoo Inn is the only accomodation option on the island. The service and fares (room US$100 per night including taxes) are the same as on other local islands in the Maldives.

The hotel offers excellent ocean excursions (diving, fishing, sandbanks, swimming with whale sharks) at cheaper prices than on expensive island resorts. And the level of privacy will be much higher, as there are maximum six tourists on the island at a time.

Fly to Male international airport (MLE). Next get to Ukulhas island by MTCC ferry - route 304. It takes 4 hours 15 minutes, ticket price is about US$5 per way:

- departure from Male at 9:00 on Tuesday, Thursday and Sunday;

- departure from Ukulhas island at 10:00 on Monday, Wednesday and Saturday.

Next take ferry #305 to Himandhoo island. Ferry takes 3 hours per way, and runs every day except Friday:

- departure from Himandhoo island at 6:30.

It is also possible to get to the island by public speedboat for US$70 per person and 2-3 hours per way.

The best time for a beach holiday on Himandhoo island in the Maldives is a dry season from January to April.