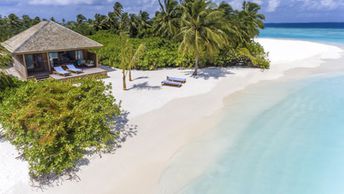 Ultimate guide (August 2022)
Hurawalhi is an island resort in the Maldives (atoll of Lhaviyani). Both the beach, as well as snorkeling/diving in the coastal water are great. Entry into the water is comfortable, but there are occasional broken corals, - like everywhere else in the Maldives. The only downside is that the beachfront bungalows are located very close to each other. So this is not the best place, if you look for complete seclusion. Shore and seabed: sand. [edit]

Hurawalhi Island Resort is a five-star property with rooms' rates starting from US$400 per night (adults only, opened in 2016). However, it makes sense to pay more for all-inclusive meal package, as a la carte menu is very expensive. It is worth to note the underwater restaurant called 5.8 - being the largest one in the World, as the hotel says.

Fly to Maldives international airport (MLE). Next take a seaplane to the island of Hurawalhi. The cost of the round transfer is US$460 per person, the flight time is 40 minutes per way.

The best time for a holiday on the beaches of Hurawalhi island is a dry season from January to April.