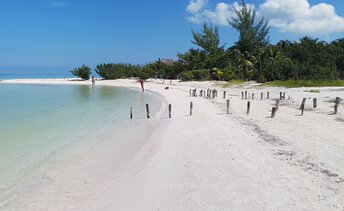 Ultimate guide (January 2022)
Isla Holbox is a popular tourist island near the northern coast of Yucatan Peninsula in Mexico. There is often a lot of algae, while the water is shallow. Landscapes are usually not very beautiful, and there are a lot of mosquitoes everywhere. But occasional palms can be very picturesque. In general, this is a rather poor place, but very expensive for tourists. This is a great spot for drunk teenagers only, since discos don't stop until the morning. Shore and seabed: sand. [edit]

In the hotels of Isla Holbox, rooms' fares range from US$20 to US$300 per night. There are almost no real beachfront resorts here. Instead, most of the options are apartments or guesthouses.

Fly to Cancun airport. Then take a bus or hire a taxi to Chiquilá town, and follow by ferry to Isla Holbox.

The best time for a holiday on the beaches of Yucatan Peninsula is a dry season from November to April. However, the summer half of the year is also good enough, since there are no crowds of tourists, and the sea water is warmer.