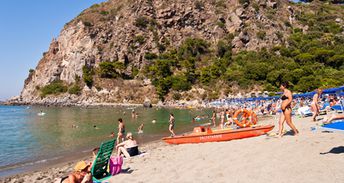 Ultimate guide (April 2022)
Lido di San Montano is one of the best beaches in Ischia island, Italy. This is a beautiful bay with mountains on both sides. The water is shallow, but it is not a problem to walk to the depth. So the sea is usually calm without strong waves. Paid beach is much longer than free area, but dressing change rooms and showers are available everywhere. The only downside is that, there are always a lot of people. The famous thermal park of Negobmo is also located nearby. Shore and seabed: sand. [edit]

San Montano Resort & SPA is a luxury five-star property being the nearest one to the coastline. Nearby, there are also few other accomodation options with room's rates starting from US$120 per night.

Fly to Naples international airport (NAP). Take a train to Pozzuoli station and get by ferry to the island of Ischia. San Montano beach can be reached by taxi or by bus.

The best time for a beach holiday in Lido di San Montano is a warm season from July to September.