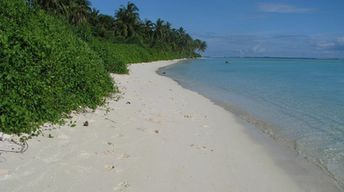 Ultimate guide (January 2020)
Nilandhoo is an inhabited island on the atoll of Faafu, Maldives. There is a beautiful bikini beach, while the whole coastline is rather pleasant. The village has several shops and cafes, but the choice is very poor. So it makes sense to bring your own food from Male. The island is notable as a former center of Buddhism in the Maldives. Later, ancient temples were destroyed and rebuilt into the mosque, which is still exists. Shore and seabed: sand, stones. [edit]

The most notable accomodation options in Nilandhoo island are Nilandhe Inn (from US$90) and Orchid Guest house Nilandhoo (from US$150). Much more hotels are under construction - including Dhebanveli Hotel (from US$110), Starfish Inn and Apquo Veli Hotel.

Fly to Maldives international airport (MLE). Next get to the island of Nilandhoo by a public speedboat. It takes 3 hours per way. The fare is US$40 per person per way (Monday, Thursday, Saturday):

There is also slow (7 hours per way), but cheap ferry (ticket is about US$15) running once per week:

- departure from Nilandhoo on Saturday at 4:30 pm.

The best time for a beach holiday on the island of Nilandhoo is a dry period from January to April.