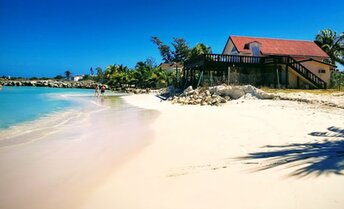 Ultimate guide (February 2023)
Runaway Bay is a great beach in the northern suburbs of St. John's - the capital city of Antigua island. The south end of the beach is wild and most beautiful. The central beach area has a breakwater featuring Witty's restaurant (formerly Lobster Shack). Further to the north, these is Paradise Beach Cottages, but it's poorly presented in the Internet. It has mediocre beach, but still quite Ok. Rush Nightclub can be found in the north end. Shore and seabed: sand. [edit]

There are no hotels right near the beach of Runaway Bay. However, within a walking distance - in Yorks village, there are several accommodation options with rooms' rates starting from US$100 per night.

Fly to Antigua international airport (ANU). Next hire a taxi.

You can relax in Antigua any time of year. Summer is considered to be off-season due to the heat and hurricane season. But it's still a great time anyway.