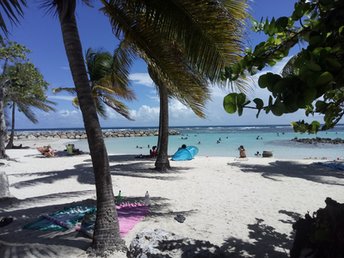 Ultimate guide (October 2022)
Sainte-Anne is one of the best beaches on Grande Terre island in Guadeloupe. This is a canonical tropical paradise with white sand and azure water on shallows. House reef protects the coast from waves, and gives some opportunities for snorkelers. The west end (near the local market) is not very interesting, as there are trees only, and buildings are located near the coastline. But in the east, there are few breakwaters making cozy lagoons with many coconut palms. This place is popular with tourists and locals as well. So sometimes it becomes slightly overcrowded. However, it is always possible to find a place in the shadow - even on Sunday. There is a shower and toilet near the parking lot. However, the toilet cabin is closed sometimes, but the shower always works fine. Shore and seabed: sand. [edit]

Sainte-Anne hotels are quite expensive by the standards of Guadeloupe. Rooms' fares start from about US$100 per night.

So if you meet "great" offer for 50 euros per night, most likely that something is bad with this accommodation. For example, map will show central location for guesthouse near Sainte-Anne beach, but in reality it is located in Douville village - 5 km from the coastline.

To avoid such unpleasant surprises, it is better to choose hotels with many user's reviews. And you should read carefully all of these reviews! Hint: Use Google Translate to understand all messages written in different languages.

Fly to Guadeloupe international airport (PTP), and next get by taxi to Saint-Anne for about 70 euros.

You may also choose bus to get back to the airport. First, you should get to the capital town of Pointe-à-Pitre (about few euros per ticket), and next take another bus to the airport (ticket is 1.2 euros). You should always ask bus driver, where it plans to go. Please note, that buses in Guadeloupe run only on weekdays from 6am to 6pm, as well as on Saturday from 8am to 1pm. No bus on Sundays!

Sainte-Anne is one of the few beaches in Guadeloupe, where you can relax any time of year. In the summer, algae are always removed from the beach. In addition, breakwaters also protect the coastline from algae.

Guadeloupe has no pronounced rainy season. But the hurricane season from June to October is a reality. However, European tourists usually travel to Caribbean nor matter the season. As for Americans, they know everything about the hurricanes, but they usually don't travel to Guadeloupe.

Sainte-Anne has a small grocery market, as well as several supermarkets including Carrefour Express with good choice of items and relatively cheap prices. So this is the best beach on the island, when we talk about shopping.

As for the restaurants, everything is boring. Beach cafes are working until 6pm only. While the main street is ugly being not comfortable for the evening promenade.