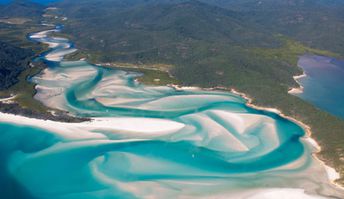 Ultimate guide (January 2022)
Whitehaven is a beach on Whitsunday island. This is one of the best beaches in Australia. While the entire Whitsunday coast suffers from the low tide, in Whitehaven it leads to spectacular exposure of the sandy bottom, which looks so beautiful from the aerial view. Shore and seabed: sand. [edit]

In the town of Airlie Beach there are large number of hotels, including some budget options.

If you choose to stay in the Hamilton island, the hotels will be much more expensive, but much better as well.

Directly on Whitsunday island there are also plenty of campsites, where you may spend a night in a tent.

Fly to Whitsunday Coast Airport (PPP) of Proserpine town. Then get to Airlie Beach city by taxi or by bus. In the city, there are lots of day trips to the island.

Rich travelers usually prefer to get to the Whitsunday Coast via Hamilton Island. In this case you should fly to the airport of Hamilton Island (HTI) and next take a tour to Whitehaven Beach.

Whitehaven beach offers great relax any time of year. Sea water is warm during the period from December to April, while it's not too rainy from June to November. So it's hard to suggest a season when everything would be perfect.