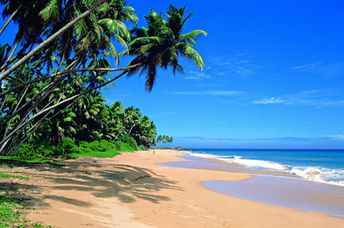 Ultimate guide (July 2020)
Beruwala (Beruwela) - good beach on the west of Sri Lanka. Keep in mind that there's almost no beaches suitable for swimming in the city. The best beaches are located to the south of town. Shore and seabed: sand. [edit]

Average price level here is about 1.5 - 2 times higher than in the whole country.

Fly to Colombo International Airport (CMB). Get free shuttle bus to Katunayake bus station. Get by bus #187 to Colombo Fort bus station in Colombo. Next catch any bus following south and passing Beruwala (final destinations are one of - Aluthgama, Ambalangoda, Galle, Matara, Kataragama). You may also get by train to Aluthgama station, and then take a tuk-tuk to your hotel. This is especially useful as most Beruwala hotels are located to the south of town, - sometimes even closer to Aluthgama.

From December to March, and in July-August. Rest of time it is the rainy season in the island.