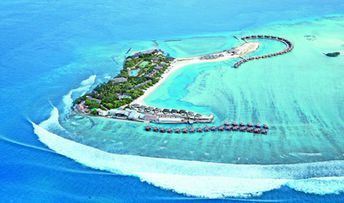 Ultimate guide (January 2023)
Cinnamon Dhonveli Maldives is an island not far from the airport of Maldives, North Male atoll. The beach itself is quite nice and well maintained. The disadvantage is the lack of palms and trees. In addition the bottom is rocky and shallow at low tide. Shore and seabed: sand. [edit]

Cinnamon Dhonveli Maldives is a four star resort with room's rates starting from US$500 per night. The old name is Chaaya Island Dhonveli. We recommend to avoid this hotel, as it's overpriced, and the beach is bad.

Fly to Maldives to Male International Airport (MLE). Hotel boat will take you directly from the airport and transfer to the hotel in 20 minutes. Kindly requested to inform the hotel of your flight number and arrival time. Transfer fees including taxes are US$170 for adult and US$90 for child.

The best time for a beach holiday in the Maldives is a dry season from January to April. Other months can also have good weather, but rains are more often.