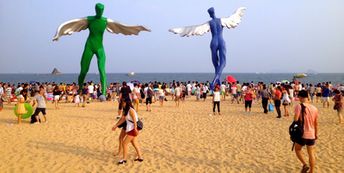 Ultimate guide (May 2020)
Dameisha is a popular beach in the eastern suburbs of Shenzhen in China. The coastline is beautiful with white sand and good amenities. However, during the high season it's overcrowded with tons of trash, so even regular cleanup don't help. Shore and seabed: sand. [edit]

Sheraton Dameisha Resort is a luxury five stars hotel in the eastern part of the beach. Room fares start from $200 per night. Sheraton has a private beach, which is much better than the public beach.

Near the Dameisha beach there are also many other hotels from $50. In general it is quite expensive by the standards of China.

October is the only time in Shenzhen when the weather is good for a beach holiday. The problem is that sea water warms enough only from May to October. But same time the period from April to September is a rainy season.