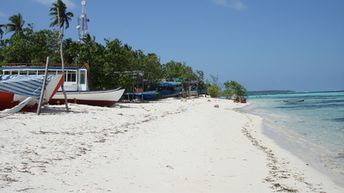 Ultimate guide (February 2023)
Dhangethi is an inhabited island in the atoll of Alifu Dhaalu, Maldives. There is a good bikini beach, and even a real beachfront resort. However, the island doesn't look very interesting in comparison with some other local islands. The best is to take snorkeling tour over the ocean searching for whale sharks. Shore and seabed: sand, stones. [edit]

On Dhangethi island there are few small guesthouses, as well as large hotel with a private beach - Ariston Dhangethi Inn. The service is good everywhere, while room's fares start from US$80 per night after all taxes being added.

Fly to Male international airport (MLE). Next get to Mahibadhoo island by MTCC ferry - route 307. It takes 4 hours 15 minutes, ticket price is about US$5 per way:

- departure from Male at 9:00 on Monday, Wednesday and Saturday;

- departure from Mahibadhoo island at 10:30 on Tuesday, Thursday and Sunday.

Next take ferry #308 to Dhangethi island. Ferry takes one hour per way, and runs every day except Friday:

- departure from Mahibadhoo island at 13:45;

- departure from Dhangethi island at 9:00.

It is also possible to get from Male to Dhangethi island by the public speedboat (US$35 per person). It runs every day except Friday, the journey takes 2 hours per way.

The best time to relax on the beaches of Dhangethi island is a dry period in the winter half of the year.