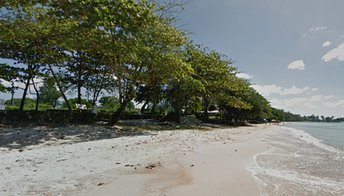 Ultimate guide (November 2022)
Independence beach is the westernmost of the main city beaches of Sihanoukville, Cambodia. Developers built up the east end of the coast, and destroyed most of the trees. However, the west end is still pretty nice. Everywhere, there are many trees (but no palms), white sand, and it's very clean near Independence Hotel Resort & Spa. And there is usually a lot of garbage outside the hotel's area. All cafes are ugly, and these are visited mostly by locals. In general, this is rather mediocre place even by the standards of Sihanoukville. Shore and seabed: sand. [edit]

Near Independence Beach, there are various accommodation options with rooms' fares ranging from US$15 to US$200 per night. By the way, these notorious hotels in the east end of the beach are still not available for the online booking.

Fly to Sihanoukville International Airport (KOS). Next get by bus or take a taxi.

The best time for a holiday on Independence beach is a dry period from November to April.