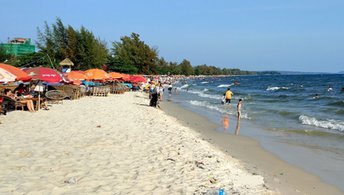 Ultimate guide (February 2023)
Ochheuteal is the longest beach in Sihanoukville, Cambodia. The north end of the coast (near the pier) is a typical hell with crowd, sunbeds and all kinds of gasoline amenities. There are a lot of delicious and cheap cafes on the parallel street, as well as right on the beach. Sea water smells, and there are often a lot of garbage from the ships. But the south end of the coast is absolutely wild and secluded. There are a lot of trees (no palms), clean white sand and comfortable entry into the water. As for the southernmost tip, again it has some civilization, but not as dirty as in the north. Shore and seabed: sand. [edit]

Most of the hotels can be found in the northern beach area (room from US$10 to US$70 per night). However, the south end of Ochheuteal Beach has also several hotels with rooms being about US$30 per night.

Fly to Sihanoukville International Airport (KOS). Next get by bus or take a taxi.

The best time for a holiday on Ochheuteal beach is a dry season from November to April.