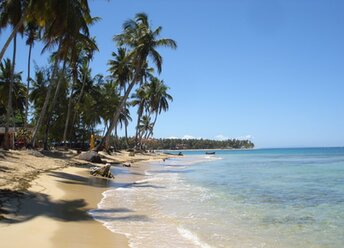 Ultimate guide (November 2022)
Las Terrenas is a popular beach on the northern coast of Samana peninsula, Dominican Republic. The town is so nice, that many expats spend here half a year or even more. The central beach is not very good. However, if you walk aside, you'll find a real tropical paradise with palms. These are also occasional areas on the house reef with good snorkeling. Shore and seabed: sand. [edit]

In Las Terrenas hotels, rooms' fares range from US$30 to US$500 per night. So choice is the best on the entire northern coast of Dominicana. Moreover, the choice is great both in budget and luxury segments.