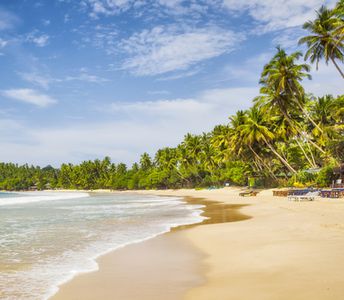 Ultimate guide (July 2020)
Mirissa - the most beautiful beach with waves in Sri Lanka. However, if you are not surfer, you will still love this place. Shore and seabed: sand. [edit]

It's quite a lot of hotels near the beach (mostly inexpensive options).

Fly to Colombo International Airport (CMB). At the airport, change $100 to the local money. It should be enough for a few days. Take free ride by red CTB bus to the airport bus station. Then bus # 187 will take you to Pettah Bus Station in Colombo. Take the bus or minibus (more preferred) following to the Matara town. Attention! Don't take the bus following to Galle, as in this case you'll have to painfully change to another bus. Buses run frequently, so if you got a bad seat, just get out and wait for the next bus. The trip takes almost 4 hours. Before reaching Matara exit at Udupila stop in Mirissa.

If your flight arrives at the airport early in the morning, it is better to take Matara Airport Express bus. It leaves the airport at about 4:30 am - 5:00 am and goes to Matara town. It passes Mirissa and some other notable beach towns (Galle, Unawatuna and Hikkidua). Note that on the way back it's possible to get into the bus in Matara only, as the bus becomes completely filled before the arrival to Mirissa.

It is also possible to reach south of the country by train. Train takes longer time than bus, but it's safer and more comfortable. In order to get to Mirissa you should reach the Fort Train Station in Welligama town. Next take a Tuk tuk ride for about 10-15 minutes.

Any time, except for the rainy season, which lasts in April-June and in September-November.