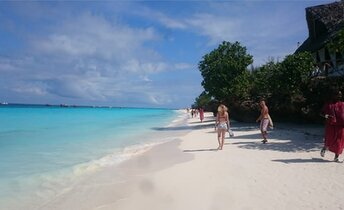 Ultimate guide (January 2022)
Royal Beach is a coastline between the beaches of Nungwi and Kendwa in the northwest of Zanzibar island, Tanzania. This is the only place on the island without problem of strong low tides! (As for Nungwi, the north coast do suffers from low tides.) So this is a great place in all respects. You can swim any time of the day, while views are beautiful everywhere. Sea water is often clear azure, which can be rarely seen on other beaches of Zanzabar. Of course, there are a lot of tourists, - however not as many as on Nungwi or Kendwa. Fortunately, there are just a few hotels here, or the place would been even more overcrowded. Shore and seabed: sand. [edit]

When choosing a hotel on Royal Beach, the price is not matter, since there are no vacant rooms most of time. The place is top popular, so you should book much in advance. Cheap hotels (from US$50 per night) are quite reasonable options. But you should better take an expensive beachfront resort with room starting from US$150 per night. Thus you'll get true tropical escape with palms and without mosquitoes. This means, that you are unlikely to get some tropical disease.

Fly to Zanzibar international airport (ZNZ). Next hire a taxi.

At the current time, there are many direct flights to Zanzibar. So connections flight via Dar es Salaam makes sense only in case, if you plan a safari on the mainland.

Feel free to relax in Zanzibar any time of year - except for the pronounced rainy season in April.