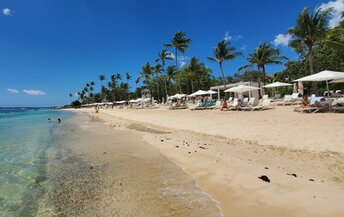 Ultimate guide (November 2022)
Playa Minitas is a beach in the east end of La Romana, Dominican Republic. There are a lot of palms ashore, and everything is pretty nice. The breakwater protects from strong waves, while swimming and snorkeling are good enough. The only problem is that this beach is totally overcrowded most of time. However, if you get here during the low season, you will probably like it. Shore and seabed: sand, stones. [edit]

Near the beach of Playa Minitas, there are mostly entire villas offered for rental from US$1000 per night. There are upscale, but still overpriced by the standards of Dominican Republic.