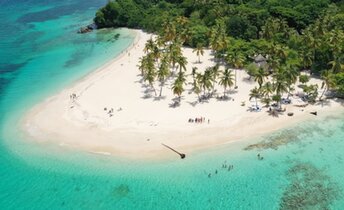 Ultimate guide (February 2023)
Cayo Levantado is a paradise island in Samana bay, Dominican Republic. It is also known as Bacardi island. Both public beach and private beach are beautiful. However, the latter can only be used by hotel guests. In the winter half of the year, sometimes it is possible to see whales right from the shore. A day tour to the island from Samana town costs from US$40, while combined tour "Cayo Levantado + whales of the Samana Bay" starts from US$70. Typically, more expensive tours include lunch, as well as a more decent boat or even a catamaran. Shore and seabed: sand. [edit]

Bahia Principe Luxury Cayo Levantado is a five-star all-inclusive resort with rooms' fares starting from US$300 per night. This is one of the few hotels in Dominicana, where you can feel that you are truly "on the island". You should book directly on their website.